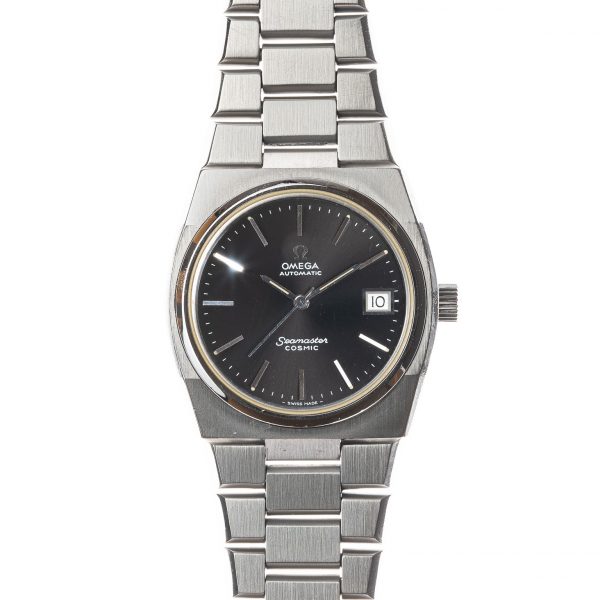 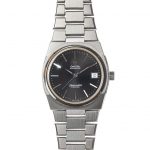 The idea of integrated bracelets was popularized in the 1970s when the threat of the quartz crisis combined with the stylistic change caused watch design to change. Omega came up with their own interpretation of using an integrated bracelet when they launched this Omega Seamaster Cosmic from 1974!

This gorgeous vintage Seamaster Cosmic runs on the 1012 automatic movement made by Omega. This great movement is fitted inside a 36mm stainless steel case which has a smooth bezel and an interesting case shape like we are used to seeing on Cosmic Omega`s. The dial on this watch has a shiny black color which is a perfect match with the highly polished stick hour markers. This watch has a big and sturdy integrated bracelet which fits the 70s look very well. This bracelet wears extremely comfortable to wear and is in good condition. The overall condition of this watch is excellent with some minor scratches on the bracelet and case and no signs of polishing.

Omega is one of the most iconic Swiss luxury watchmakers currently around. Based in Bienne, Switzerland and founded by Louis Brandt in La Chaux-de-Fonds in 1848. Omega was formally known as “La Generale Watch Co.” until incorporating the name Omega in 1903, when they became Louis Brandt et Frère – Omega Watch & Co. In 1982, the company officially changed its name to Omega SA.

Britain’s Royal Flying Corps chose Omega watches in 1917 as its official timekeepers for its combat units, as did the U.S. Army in 1918. Omega watches were the choice of NASA and the first watch on the Moon in 1969. In addition, Omega has been the official timekeeping device of the Olympic Games since 1932. James Bond has worn it in films since 1995; other famous Omega wearers, past and present, include Buzz Aldrin, George Clooney, John F. Kennedy, Mao Zedong and Elvis Presley.