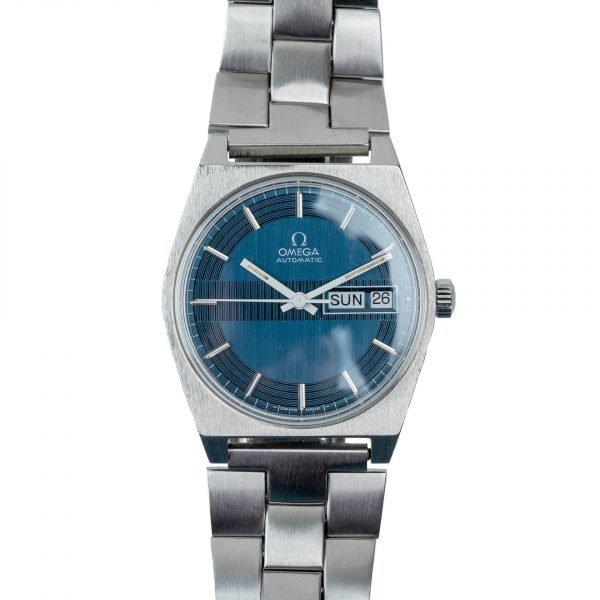 Blue dials have been popular for some time now in the watch industry. With many different shades this dial color is perfect for a casual look with some jeans. This particular dial has a deep blue color and a special texture dial. Surrounding the inner dial sits an interesting train rails type of texture which the hour markers are placed upon. Made for the American market this blue stunner certainly is a catch!

This watch was born in 1972 housing an unadjusted cal. 1020 automatic movement with date and day function. These types of unadjusted movements are typically made for the American market. The 35mm stainless steel case connects nicely to the special steel Duchess USA bracelet. These bracelets were made by Duchess for Omega in the early 70s mainly to bypass the tax which was put on importing gold at the time. This bracelet however is made from steel which is quite rare! The striking Blue texture dial contrasting with the white hands set is truly amazing. The condition on this watch is excellent, with minor scratches on the case and crystal this watch shows no signs of polishing.

Omega is one of the most iconic Swiss luxury watchmakers currently around. Based in Bienne, Switzerland and founded by Louis Brandt in La Chaux-de-Fonds in 1848. Omega was formally known as “La Generale Watch Co.” until incorporating the name Omega in 1903, when they became Louis Brandt et Frère – Omega Watch & Co. In 1982, the company officially changed its name to Omega SA.

Britain’s Royal Flying Corps chose Omega watches in 1917 as its official timekeepers for its combat units, as did the U.S. Army in 1918. Omega watches were the choice of NASA and the first watch on the Moon in 1969. In addition, Omega has been the official timekeeping device of the Olympic Games since 1932. James Bond has worn it in films since 1995; other famous Omega wearers, past and present, include Buzz Aldrin, George Clooney, John F. Kennedy, Mao Zedong and Elvis Presley.