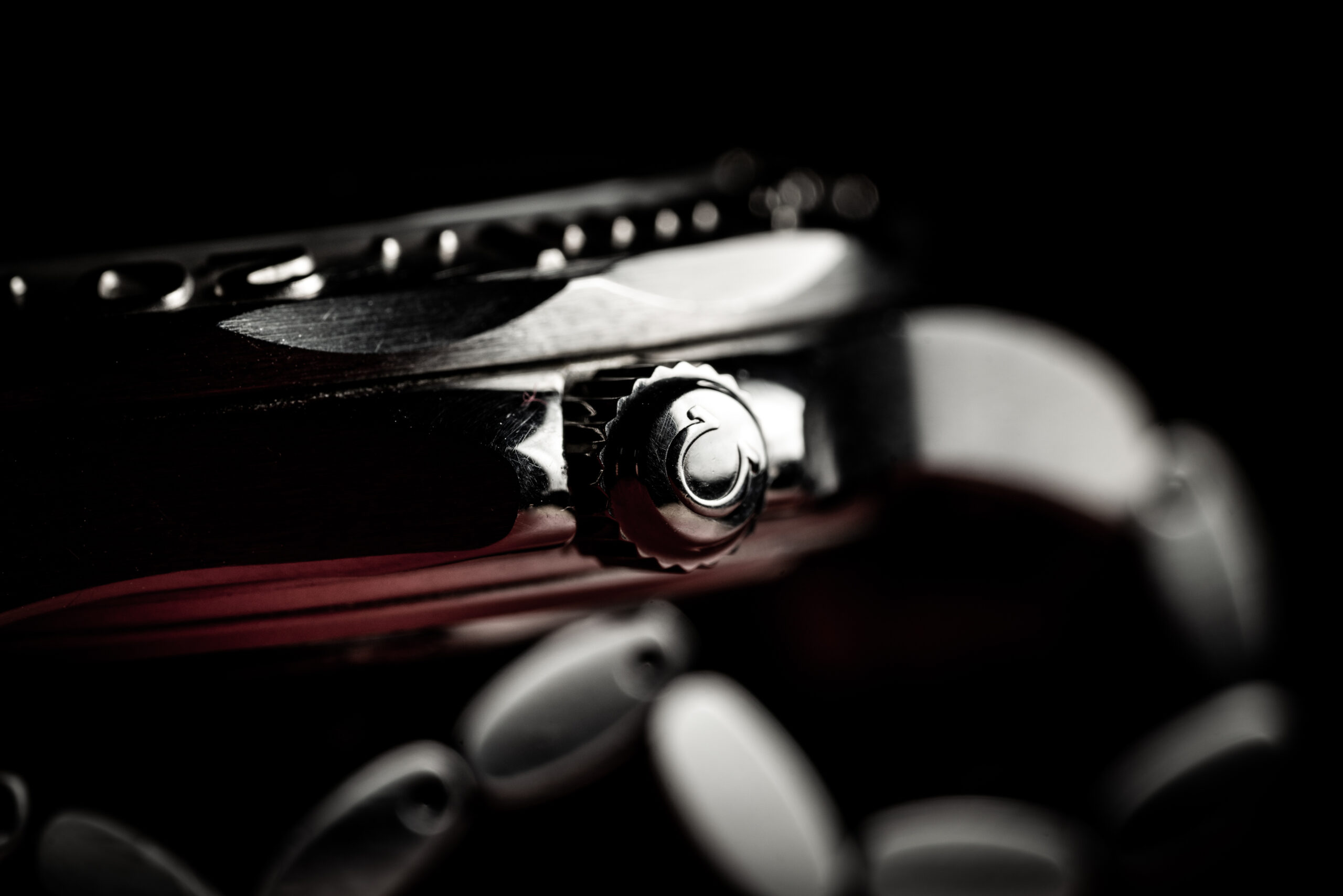 Open-hearted, friendly, knowledgeable and honest, four traits that describe the perfect watch dealer. For the fourth edition of Dealer Talks I talked to a man that seems to possess all these traits, while also being genuinely passionate about what he is doing. I had a conversation with Dani from Angelini Watches about how he started, risks he took and being a successful entrepreneur. Enjoy!

Stan: How did you start selling watches?

Dani: I started when I still lived at home, I used half of my salary to buy watches. After a while I quit my normal job and now, since about 7 months, I focus solely on watches. I can pay my rent and feed my cats so I am happy with it!

S: And you worked fulltime before this?

D: Well, it was work-learning, so it was combined with school. After that, I did work full-time, but that didn’t last very long either. At the time I was still living at home, so my expenses were next to nothing.

S: Then you had enough space to in invest.

D: Yes, exactly. Then I could just keep investing. It didn’t matter that much if I had a bad deal. It was like, it can happen, you can learn from it.

S: Do you also feel more pressure, now you do it full time?

D: Yes, quite a bit. I had a girlfriend for seven years. I lived with her, so you divide all costs by two. For 4-5 months now I have to pay for it all by myself.

D: Yes, that is very costly.

S: Are you also more eager to make deals now? That you accept lower margins now, or not really?

D: I’m sticking to a fixed percentage of margins. But sometimes I just list a lot of things on Catawiki. So, if the condition isn’t really great, then it’s going to auction. For the rest, I also have a fixed customer network. Actually, all my Rolexes practically go to one person, a big collector so to say. It is a coincidence that I met him. I once had a Rolex bracelet for sale and he wanted to buy it. He wanted to make a trade. I like that, so decided to go through with it. I was going to trade that bracelet with that man. And he said, I’m a collector, and if you have Rolex watches, can you forward them to me? I said yes, fine, I can send some pictures. Generally – I don’t want to say all of them – but I think 70% generally goes to him. And I am happy about that. I have to drive far for it, but okay. You have to do something for it.

D: Yes, exactly. It is quite a big collector. That man is also 50 and he just likes it. He has practically every model. It’s a lot of fun though. It is very nice to do business with him. He is a very nice man.

S: Did you sell other things before watches?

D: I started when I was about 16 years old. I sold bracelets. If you still want them: I have a whole bowl full here for you. Then I started selling socks.

D: Yes. I sold weed socks. With weed pictures on it. They sold like crazy. I ordered them from China and sold them at school. Then I talked to a buddy of mine, who lives here a block away, and he is an antique dealer. He trades antique silver. I was there one evening and then we had a drink. And when I have been drinking, I see the potential in things faster than when I am sober. So, he suddenly came up with about 100 silver bracelets. Drunk me: I am going to buy that. In the end I literally walked down the street with a suitcase full of bracelets. I just started asking people: do you want a bracelet? I ended up buying them for about 2 euros per bracelet, so that was not very expensive. When I had sold them all, I said to him: I really like to trade stuff! He said, what else are you interested in? And then I said: I am now saving to start my own watch brand. However, in this society, it is not that simple to start up your own watch brand. You are never going to be another Rolex. So, then he said: if you find watches interesting, come along to where I buy my silver. There are watches lying there occasionally. So, I did. What did I buy first? It must have been an Omega. I think it was a redial. So, I couldn’t sell it. But then he said: you need to do better research. Because you can’t just buy it because it looks beautiful. You have to do more research. Buy some books and read about watches. I decided to put my money and time into it and start my journey.

S: Nice! So, at that time you actually started with the watch trade. And you scaled up after a while?

D: Yes. But at a certain point you will, of course, find out that those watches also need to be serviced etc. At the beginning you cut yourself a hundred times, of course, and at some point, you realize how to do it the right way.

S: Cool. So, have you always been a trader?

D: Yes. My buddies, for example, wanted to throw a party in Goes. in [El Torro], as it was called, they said: you are good at selling, right? Then you chip in, and then you start selling the tickets. At one point I also started selling for other parties. I always enjoyed selling things.

S: What does success as an entrepreneur mean to you?

D: That you make a living and that you do your work with pleasure, even if you can just pay for your bread. If you do something with pleasure all your life, then you never worked a day in your life.

S: That is true. And when you look at yourself now, do you find yourself successful at the moment?

D: Yeah, overall, I’m pretty happy. I can pay for my bread. Of course, you prefer to have a Porsche at your driveway rather than a Ford Fiesta from 1999, you know. I am happy and at the moment I am successful.

S: What do you think are the most important skills for entrepreneurs?

D: Keep going no matter what. What do you think?

S: I think persistence indeed. Also, independence and that you are socially skilled. Because what has emerged from the past interviews is that many dealers are independent and also very social and open. That you just talk to people very easily. Primarily, that you can set certain goals and that you want to achieve them.

D: Yes, I get that. In terms of perseverance: you always have a shitty month, or something goes wrong, or you have someone who has complaints, even if it may not be justified. So yes, I think that perseverance is important.

S: That’s a good one. And do you think persistence has had the biggest impact on your success so far?

D: No, I think that’s passion. But that’s just purely for me of course, because I just cut myself a hundred times before I get it right. It is true. But yes, I learn from my mistakes.

S: And is it a passion for trading or for watches?

D: For watches. Certainly. Of course, it started with trading, but I didn’t have an amazing product then. Socks, it’s not like I’m thinking, these are the best socks in the world. And I am not a fan of bracelets.

S: Can you tell me a bit about the risks you took to get here?

D: Of course. That first watch I bought was a risk in itself. In the beginning it is all risk, and at some point, you will realize how to decrease your risk. Redials and things like that. That is, of course, at the beginning difficult to see.

S: Basically, the whole process is a risk. Are you generally someone who takes a lot of risks or are you more conservative?

D: In general, I do take quite a lot of risks. But I think it is also something that people appreciate. Because usually when they message me something like: hey, is this something for you? Then I’ll give a prize that same minute. So, I am someone who just says a price quickly. Maybe it is stupid sometimes, but it usually works out well, otherwise I wouldn’t do it again.

D: Koen (Verseveldt), once said: I am going to do an Angelini’tje. An, Angelini, that is my last name, is when you see something for sale, and you just send that guy a message, you get in your car and you just drive there. That’s an Angelini’tje, that’s what he calls it.

D: If I see something and it’s in great condition for a nice price, I will be at your door within the hour. That’s how I work.

Thanks for the open hearted answers Dani! Check out Dani’s work here:

Express Delivery: Orders are usually dispatched within 2 business days and should arrive within 48 hours after dispatch, in all of Europe.

All our watches are checked and serviced when necessary. That's why you always get 6 months warranty on all our watches.